e.g., Linnaeus classification of plants based on no of androecium. 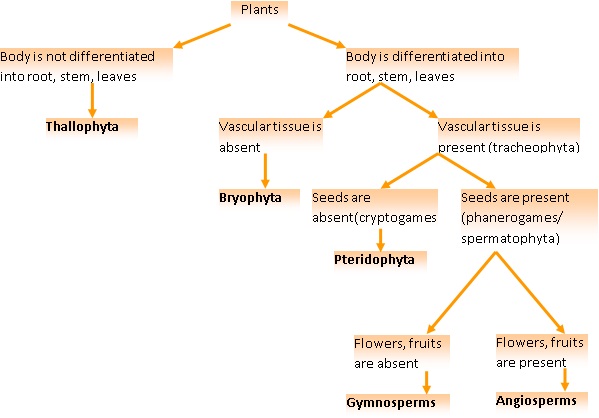 Size and form of algae –

By vegetative, asexual and sexual methods.

The algae are divided into three main classes (on the basis of pigment and stored food): Chlorophyceae, Phaeophyceae and Rhodophyceae. 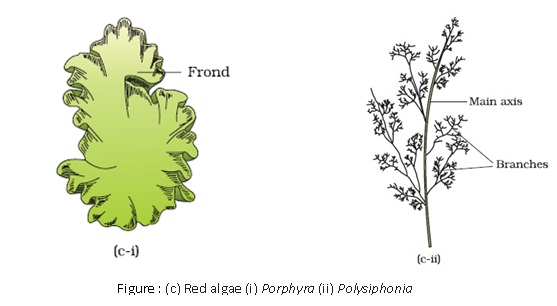 BRYOPHYTES (Amphibians of the plant kingdom)

The plant body of bryophytes is more differentiated than that of algae. It is thallus-like and prostrate or erect, and attached to the substratum by unicellular or multicellular rhizoids (root like structure).

They lack true roots, stem or leaves. They may possess root-like, leaf-like or stem-like structures.

The main plant body of the bryophyte is haploid. It produces gametes, hence is called a gametophyte.

The sex organs in bryophytes are multicellular.

The female sex organ called archegonium is flask-shaped and produces a single egg.

The antherozoids are released into water where they come in contact with archegonium.

An antherozoid fuses with the egg to produce the zygote.

Zygotes do not undergo reduction division immediately. They produce a multicellular body called a sporophyte.

Some cells of the sporophyte undergo reduction division (meiosis) to produce haploid spores.

These spores germinate to produce gametophyte.

The bryophytes are divided into liverworts and mosses.

The gemmae become detached from the parent body and germinate to form new individuals.

After meiosis, spores are produced within the capsule.

The first stage is the protonema stage, which develops directly from a spore. It is a creeping, green, branched and frequently filamentous stage.

The second stage is the leafy stage, which develops from the secondary protonema as a lateral bud. It has upright, slender axes bearing spirally arranged leaves. They are attached to the soil through multicellular and branched rhizoids. This stage bears the sex organs.

There are two types of sporophytes in pteridophytes –

The megaspores and microspores germinate and give rise to female and male gametophytes, respectively.

The female gametophytes in these plants are retained on the parent sporophytes for variable periods.

The development of the zygotes into young embryos takes place within the female gametophytes. This event is a precursor to the seed habit considered an important step in evolution.

The pteridophytes are further classified into four classes: 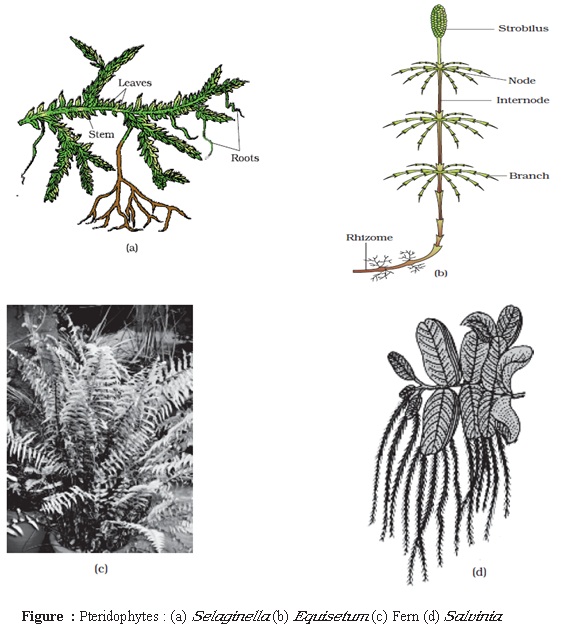 The gymnosperms are They produce haploid microspores and megaspores.

Spores are produced within sporangia that are borne on sporophylls, which are arranged spirally along an axis to form lax or compact strobili or cones.

The microspores develop into a male gametophytic generation which is highly reduced and is confined to only a limited number of cells.

This reduced male gametophyte is called a pollen grain.

The megaspore mother cell is differentiated from one of the cells of the nucellus.

The nucellus is protected by envelopes and the composite structure is called an ovule.

One of the megaspores enclosed within the megasporangium (nucellus) develops into a multicellular female gametophyte that bears two or more archegonia or female sex organs.

The multicellular female gametophyte is also retained within megasporangium.

Each embryo-sac has a three-celled egg apparatus – one egg cell and two synergids, three antipodal cells and two polar nuclei.

In this, Sporophytic generation is represented only by the one-celled zygote and there are no free-living sporophytes. Meiosis in the zygote results in the formation of haploid spores. The haploid spores divide mitotically and form the gametophyte. The dominant, photosynthetic phase in such plants is the free-living gametophyte.

e.g., Volvox, Spirogyra and some species of Chlamydomonas.(most of the algae)

In this, diploid sporophyte is the dominant, photosynthetic, independent phase of the plant. The gametophytic phase is represented by the single to few-celled haploid gametophyte.

e.g., All seed-bearing plants i.e. gymnosperms and angiosperms, some algae like Fucus.

In this, both gametophytic and sporophytic phases are multicellular and often free living.

download thses notes in printable pdf file from link given below –