Qs.1       Give the difference between simple and compound leaf.

When a fibrous root absorb food and become fleshy, it is called tuberous root.

Epiphytes – Epiphytes are the plants which live on branches of trees. They obtain only habitat from host. They do not obtain water, salts, or prepare food from host. They have no contact with soil.

Epiphytic roots – epiphytes have some adventitious roots which remain suspended in air. These roots are spongy, thick, long and greenish. They have a specialized tissue Velamen on their outer surface. The cells of this tissue absorb moisture from atmosphere. These roots are also called hygroscopic roots.

All tissues on the innerside of the endodermis such as pericycle, vascular bundles and pith constitute the stele.

Pericycle                 –     few layers of thick-walled parenchyomatous cells, Next to endodermis. Initiation of lateral roots and vascular cambium during the secondary growth takes place in these cells.

Vascular bundles         –      Radial/alternate type. Exarch xylem. There are usually two to four xylem and phloem patches. Later, a cambium ring develops between the xylem and phloem.

Qs.4     Give the differences between heart wood and sap wood.

Qs.5       Describe the tissue mainly present in the periosteum of the bones and perichondrium of Cartilage.

Tissue mainly present in the periosteum of the bones and perichondrium of Cartilage is White fibrous tissue.

Sexual dimorphism – when both sexes male and female are morphologically different.

granulocytes WBC have granules in their cytoplasm.

On the basis of staining characteristics of cytoplasm granules and shape of nucleus, granulocytes are of three types.

Qs.8       Explain excretory organs and process of excretion in cockroach?

They are present at the junction of midgut and hindgut. They are about 150 yellowish long, thin and hollow blind tubules. These blind tubules always float in the haemolymph. Each tubule is lined by glandular and ciliated cells. They absorb nitrogenous waste products and convert them into uric acid which is excreted out through the hindgut. Therefore, cockroach is a uricotelic animal. Excretory substances enter into the hindgut having large amount of water. This water is absorbed by the wall of hindgut.

Qs.9       Explain the types of ovary on the basis of the position of the ovary?

Three kinds of flowers occur on the basis of the position of the ovary.

A composite fruit develops from all the flowers of a whole inflorescence forming one body at maturity. There are two types of multiple fruits namely sorosis and syconus.

Q.10       Write the floral characters of the family of Solanum nigrum.

Solanum nigrum is a member of Solanaceae family (Potato family).

It is classified as –

Its floral characters are –

During copulation ovum come in the genital chamber, where they are fertilised by sperms. A dark brown coloured ootheca is formed by the group of fertilized eggs. Each ootheca has 14 to 16 eggs which give rise to nymphs.

Q.12       Explain pulmonary respiration and its steps in frog?

Q.13       Explain the structure of various components of complex tissue associated with transportation of water.

Qs.14     Describe the simplest and most widely distributed connective tissue?

Areolar tissue is the simplest and the most widely distributed connective tissue.

It is made up of fibres and cells.

(A) Modification of root for climbing –

Plants growing as twinners and climbers possess weak stems so they possess modified structures for climbing.

In Pothos,long branched or unbranched, brown adventitious roots develop from nodes and internodes of the stem. They are called climbing or clingingroots. They secrete a sticky material which helps them to stick to the support, and helps them in climbing.

(B) Modification of stem for climbing –

In these plants, the axillary buds modified into thin, long, threadlike structures. These are called Stem tendrils.

They twine around the support and help the plant in climbing.

(C) Modification of leaf for climbing –

Frog is a unisexual animal. 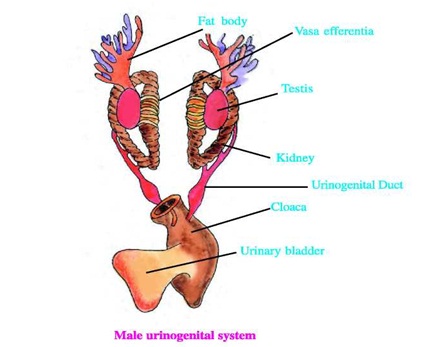 Qs.16     Explain voluntary nervous system and draw the diagram of dorsal view of brain of frog?

Qs. 18    Explain the structure of monocot seed with the help of diagram?

Maize is a typical example of monocotyledon seed (endospermic seed). 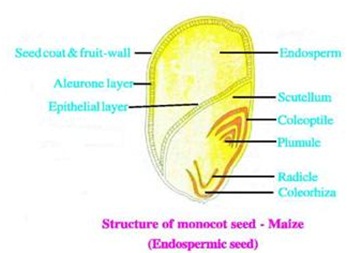 printable pdf of solution is given here.