A tissue is a group of cells having a common origin and usually performing a common function.

The meristems which occur at the tips of roots and shoots and produce primary tissues.e.g., root and shoot apical meristem.

During the formation of leaves and elongation of stem, some cells ‘left behind’ from shoot apical meristem, constitute the axillary bud. Such buds are present in the axils of leaves and are capable of forming a branch or a flower.

The meristem which occurs between mature tissues is known as intercalary meristem.

They occur in grasses and regenerate parts removed by the grazing herbivores.

Both apical meristems and intercalary meristems are primary meristems because they appear early in life of a plant and contribute to the formation of the primary plant body.

The meristem that occurs in the mature regions of roots and shoots of many plants, particularly those that produce woody axis and appear later than primary meristem is called the secondary or lateral meristem.

Fascicular vascular cambium, interfascicular cambium and cork-cambium are examples of lateral meristems. These are responsible for producing the secondary tissues. 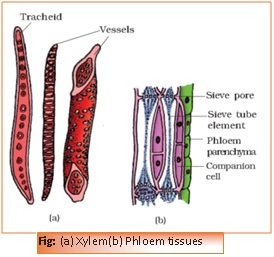 On the basis of their structure and location, there are three types of tissue systems.

The anatomy of the monocot root is similar to the dicot root in many respects.

It has epidermis, cortex, endodermis, pericycle, vascular bundles and pith.

As compared to the dicot root, monocots have more xylem bundles (usually more than six – polyarch).

Pith is large and well developed.

Monocotyledonous roots do not undergo any secondary growth. 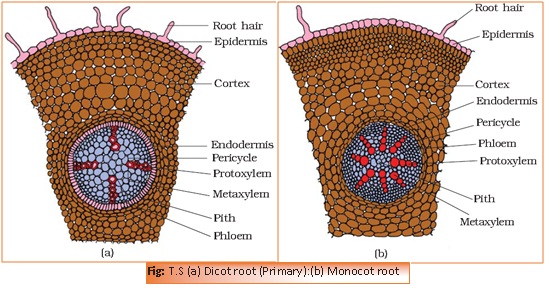 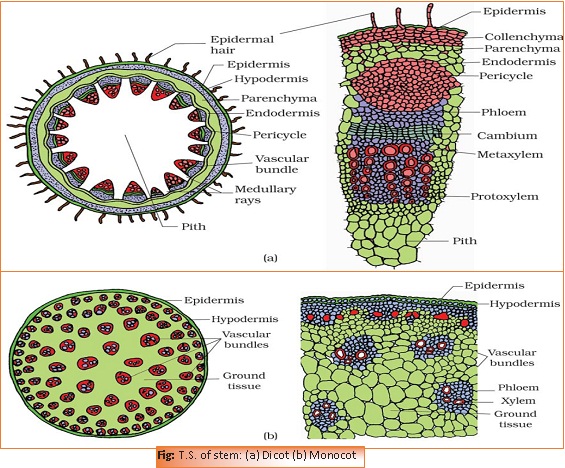 Vascular system –       vascular bundles are seen in the veins and the midrib.

The veins vary in thickness in the reticulate venation of the dicot leaves.

The anatomy of isobilateral leaf is similar to that of the dorsiventral leaf in many ways.

It shows the following characteristic differences –

Activity of the cambial ring

The heartwood does not conduct water but it gives mechanical support to the stem.

Secondary growth due to Cork Cambium