Whatever be the life span, death of every individual organism is a certainty, i.e., no individual is immortal, except single-celled organisms.

Reproduction is of two types–

When offspring is produced by a single parent with or without the involvement of gamete formation, the reproduction is Asexual.

When two parents (opposite sex) participate in the reproductive process and also involve fusion of male and female gametes, it is called sexual reproduction.

Water hyacinth, an aquatic weed, also known as ‘terror of Bengal’ propagate vegetatively. Earlier this plant was introduced in India because of its beautiful flowers and shape of leaves. Since it can propagate vegetatively at a phenomenal rate and spread all over the water body in a short period of time, it drain oxygen from water body and cause death of fishes. (Eutrophication)

Bryophyllumshow vegetative propagation from the notches present at margins of leaves. 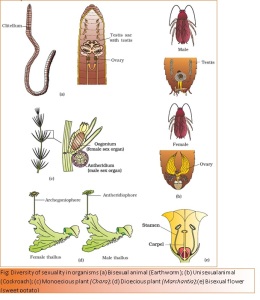 Organisms exhibiting external fertilisation show great synchrony between the sexes and release a large number of gametes into the surrounding medium (water) in order to enhance the chances of syngamy. This happens in the bony fishes and frogs where a large number of offspring are produced. A major disadvantage is that the offspring are extremely vulnerable to predators threatening their survival up to adulthood.

In all these organisms, egg is formed inside the female body where they fuse with the male gamete. In organisms exhibiting internal fertilisation, the male gamete is motile and has to reach the egg in order to fuse with it. In these even though the number of sperms produced is very large, there is a significant reduction in the number of eggs produced. In seed plants, however, the non-motile male gametes are carried to female gamete by pollen tubes.

13 thoughts on “CHAPTER 1 : REPRODUCTION IN ORGANISMS”